My Pianist friend – An Anecdote!

It was the last day of my New Zealand holiday. I was in Queenstown and already quite mesmerised by the beauty of the place and the country. Since my flight was in the afternoon, I had booked myself in the TSS Earnslaw Vintage Cruise in the morning, so I can spend some relaxed time and also enjoy sailing on the lake Wakatipu. I checked out of my hotel after breakfast and reached the Steamer Wharf by 9.30am. The boarding had already commenced, so I queued to board.

The vintage steamship is 105 years old and one of the oldest one in the Southern hemisphere. The ship was quite big, and the crowd was mostly kids and families. It was freezing that morning in Queenstown, more so because I was near the lake. After I boarded and found myself a nice window seat in the upper deck, I realised that the kids had started opening the windows and were enjoying the icy wind. I was feeling cold and got some coffee from the onboard café. The cruise started with a classic hoot, the surroundings were breathtaking, snow-clad mountains, the beautiful lake and small houses across the lake. While I was enjoying the view, I was also a bit pricky by the cold and feeling a bit lonely in the crowd =(

To my surprise, after the ship sailed, I could hear a beautiful music of somebody playing the piano! Never thought there could be a piano onboard, so I started walking towards the music. There was not only a vintage piano onboard but also an old lady playing the instrument with ease and beauty! She was lost in her own world and had a beautiful smile while she entertained the crowd. I was charmed at once and went and sat near her. She looked at me and smiled and immediately I felt a bond as well as found the companion I was probably seeking! I was lost in her music and forgot about the cold or the icy wind. She played old songs one after the other and after a while took a break when the ship docked at Walter Peak. Most of the people got down in this port making the ship almost empty. 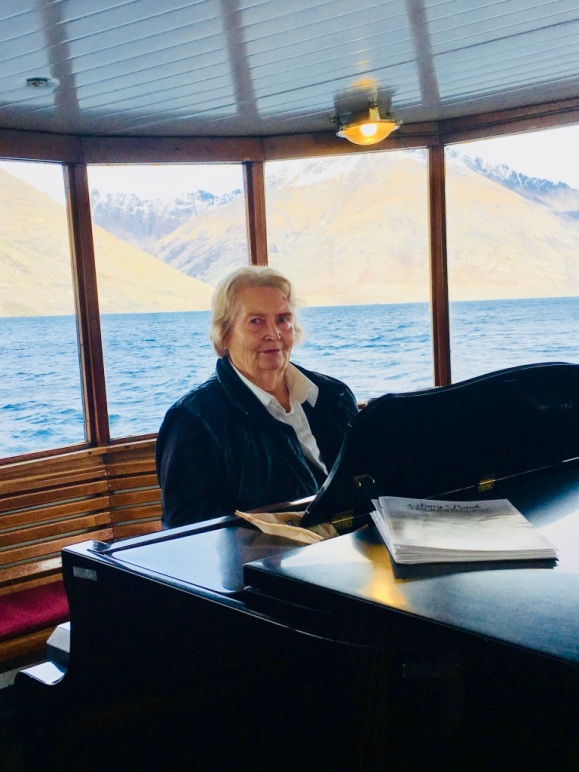 The piano player asked about me and where I had come from, we started talking and I got to know that she had started playing the piano as a teen and as she grew up, she had to give up her love for sustenance. She has been a farmer and her life were all hard work for family. When she retired from farming, she decided to get back to her lost love for playing the piano and here she was, playing the piano onboard, in the oldest cruise of the Southern Hemisphere! She said she will quickly grab a bite before her next session starts.

I kept observing her, she must be in her 90s, old, yet so elegant and graceful in her manners. She walked very slowly holding a stick, the fingers of her hand had bandages, may be due to playing the piano every day, her hands were shaky when she walked or when she made her tea but not when she played the piano, like magic! She sat and looked at the lake and the mountains while having a bite. Wonder what she was thinking, maybe she was thinking that she had a gratified life or maybe she was thinking what she will cook for her grandchildren whom she was meeting that evening for dinner!

My friend lost in thoughts

She could say if it will snow or not looking at the sky, her favourite season was Summer since as a farmer it was tough for her to work in the fields in the winter months. She told me how March, April and May are the most beautiful months in Queenstown and also how much she enjoys meeting new people every day in the cruise  and playing the piano for them! I could have listened to her all day but soon we reached the marina and it was time for me to say goodbye. She gave me a song book and said I can keep this as a souvenir. I took my pen out and requested her to autograph the song book for me =) She was quite surprised by this request and seemed quite pleased too and smiled at me and then scribbled some words with her quivering, soft and elderly hands. I took the autographed song book and gave her a hug before I said goodbye, she said “The world is very small, we will meet again very soon!”

I disembarked from the cruise, took the song book out and read what she had written, “Best wishes from Elenor, Queenstown, NZ”. My heart melted by her kind words and the beautiful memory Elenor gifted me which will be with me forever. Suddenly there was a gust of icy wind that hit my face but this time I smiled and felt wonderful, life was good. Will miss you Elenor but like you said, we will meet very soon! =)